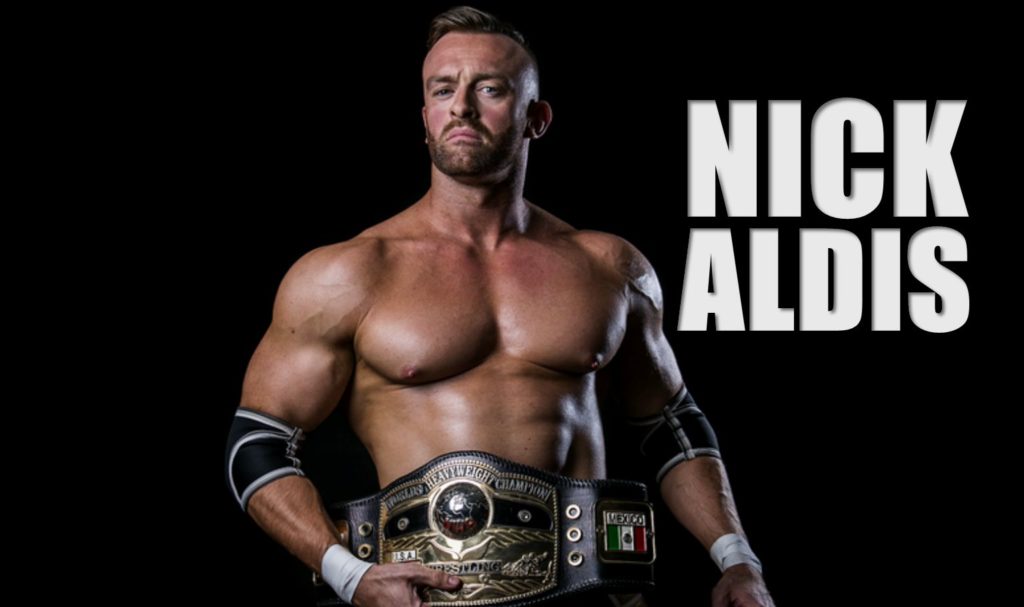 Nick Aldis is a British professional wrestler, business owner, father and husband who is currently signed to NWA where he is the current NWA World Heavyweight Champion in his second reign. Nick is also the husband of past guest Mickie James and the father to their son. Having a wife that traveled as much, if not more, than him and adding a son to their exhaustive travel plans it was great to hear how he is balancing family demands while handling all of the career responsibilities. Not that he wasn’t already busy enough, we also discussed him starting his own supplement company, Legacy Sports Nutrition. Nick is building his supplement business using the same success principles he used to build his body, become a world champion pro wrestler, husband and father.

In late 2017, Nick Aldis signed with the NWA, under the new management run by Billy Corgan, yes the lead singer of Smashing Pumpkins, and would soon win the NWA Worlds Heavyweight Championship, a title he would win twice, becoming the second born British-born wrestler to hold that championship. Aldis would become a cornerstone of NWA and is often credited with bringing NWA back to relevance and has since headlined numerous Pay Per View events for the company. In total, Nick Aldis is a four-time world champion in wrestling.

After becoming proficient in swimming and tennis, Aldis began bodybuilding, which ultimately led to his training to be a professional wrestler. After beginning his training at the age of 16, he made his professional debut on 17 December 2004 for the British Wrestling Promotion Dropkixx Wrestling (DXW), losing to Charlie Rage.

Early title matches included a DAM Promotions event where he teamed up with Bash to take on the DAM Tag Team Champions Big Dave and The Bulk for the titles and he also went up against Ashe for the LDN Championship at Summit Wrestling, he would lose both matches. In 2007, he would face the WAW British Heavyweight Champion Brett Meadows for the title and lost.

His last match before joining TNA was a win against Marty Scurll. During his time in England he wrestled primarily at All Star Wrestling and World Association of Wrestling.

Aldis competed under his Brutus Magnus name and gimmick at the TNA Maximum Impact! Tour in Glasgow, Scotland on 22 January 2009, where he defeated Matt Morgan. Two days later on the last night of the tour, Magnus defeated Sheik Abdul Bashir in London at the Wembley Arena. On 29 January episode of Impact!, another vignette of Magnus was played and it stated that Magnus’ debut would occur next week. He debuted on 5 February episode of Impact! as a villainous character, defeating Shark Boy with his finishing move, the Tormentum. After the match, he issued an open challenge to anyone on the TNA roster. Chris Sabin answered the open challenge at Against All Odds, which Magnus also won. This continued with another victory against Eric Young at Destination X.

On 30 April 2009 episode of Impact!, Magnus dropped the gladiator character and formed a villainous group called The British Invasion with fellow British wrestlers Doug Williams and Rob Terry. In their debut match as a team, Williams and Magnus defeated Homicide in a two-on-one handicap match after assaulting his tag team partner Hernandez backstage prior to the match, and stealing his Feast or Fired briefcase. The Invasion has since formed an alliance called World Elite with Eric Young, Sheik Abdul Bashir and Kiyoshi and engaged in a feud with Team 3D over the IWGP Tag Team Championship. On 30 July episode of Impact!, Magnus and Williams won the IWGP Tag Team Championship by defeating Team 3D in a Tables match.

On 1 November episode of Impact Wrestling, Magnus challenged Joe to a rematch as part of the Open Fight Night; however, he lost the match via disqualification, after hitting Joe with a wrench. The rivalry culminated in a No Disqualification match on 11 November at Turning Point, where Magnus was again unsuccessful in winning the title. On the following episode of Impact Wrestling, Magnus was sidelined with a storyline injury after he was ambushed by the Aces & Eights and hit in both his knees with a ball-peen hammer.

On 21 November 2013 episode of Impact Wrestling, Magnus was entered into a tournament to crown a new TNA World Heavyweight Champion after the title was vacated. He defeated Samoa Joe in a Falls Count Anywhere match at Turning Point and Kurt Angle on Impact Wrestling to advance to the finals. He defeated Jeff Hardy in a Dixieland match to become the new TNA World Heavyweight Champion on 3 December; the match aired on 19 December, on Impact Wrestling: Final Resolution. In the process, he turned heel by joining Team Dixie and allying himself with Dixie Carter, Ethan Carter III, and Rockstar Spud.

Shortly after his loss to Eric Young, Magnus began a losing streak, after losing out on a number one contender’s spot for the championship Magnus was met in a backstage segment by his childhood friend and fellow Brit Bram, who began to chastise him, claiming he had gone soft. Over the next several weeks, Magnus began showing signs of a face turn when Bram would throw weapons into the ring and encourage him to let out a more intense side but Magnus would refuse. More signs began to show from Magnus when he first attacked Bram in a backstage segment, and then when Magnus saved Tigre Uno from an assault from Bram the following week. On the edition of 5 June of Impact Wrestling, it looked as though Magnus would finalize his face turn and save Willow from Bram, but would in fact remain heel and attack Willow himself with a steel pry bar. Since developing a more violent persona, Magnus and Bram began a rivalry with Willow and the returning Abyss. Magnus defeated Willow on 15 June 2014, at Slammiversary XII. On 26 June 2014, episode of Impact Wrestling Magnus and Bram defeated Willow and Abyss in a tag team Monster’s Ball match. On 20 August 2014, at Hardcore Justice, Magnus was a participant in a six-sided of steel match to determine a number 1 contender for the TNA World Heavyweight Championship; the match was ultimately won by Eric Young and Bobby Roode.

On 22 July 2012, Magnus made his debut for the Japanese Pro Wrestling Noah promotion, when he and Samoa Joe defeated Akitoshi Saito and Jun Akiyama to win the GHC Tag Team Championship. On 8 October, Magnus and Joe lost the title to KENTA and Maybach Taniguchi in their first defense.

On 29 June 2015, it was announced that Aldis had signed with Global Force Wrestling, and will compete under his real name. On 9 July, Aldis made his in-ring debut defeating Tommaso Ciampa as part of the inaugural GFW Grand Slam Tour. On 10 July 2015, Aldis faced Kongo Kong as part of the GFW Grand Slam Tour in Erie, Pennsylvania making this their first of three matches during the tour which saw him winning on all three occasions.

On 20 May 2017, Aldis made his first post-GFW appearance for WFW losing to Tommy Dreamer. On 11 and 12 August, Aldis wrestled for House of Hardcore losing on the first night to Jeff Cobb and winning on the second night by defeating Bull James.

On 23 September 2017, Aldis made his debut for Championship Wrestling from Hollywood, defeating Will Roode. Immediately following the match Aldis set forth a challenge to Tim Storm for the NWA Worlds Heavyweight Championship. That match took place on 12 November and saw Storm retain the title; this was the first title match under the new NWA regime headed by Billy Corgan. Although many other wrestlers were vying for a shot at the title, Aldis kept demanding a rematch due to what he perceived to be an unfair finish wherein Storm pushed off the bottom rope to make the pin. On 9 December, Aldis defeated Storm in a rematch at Cage of Death 19 to become the new NWA World Heavyweight Champion, making him the second British-born champion after Gary Steele.  On 21 October 2018, at the NWA 70th Anniversary Show, Nick Aldis beat Cody to regain the NWA Worlds Heavyweight Championship.