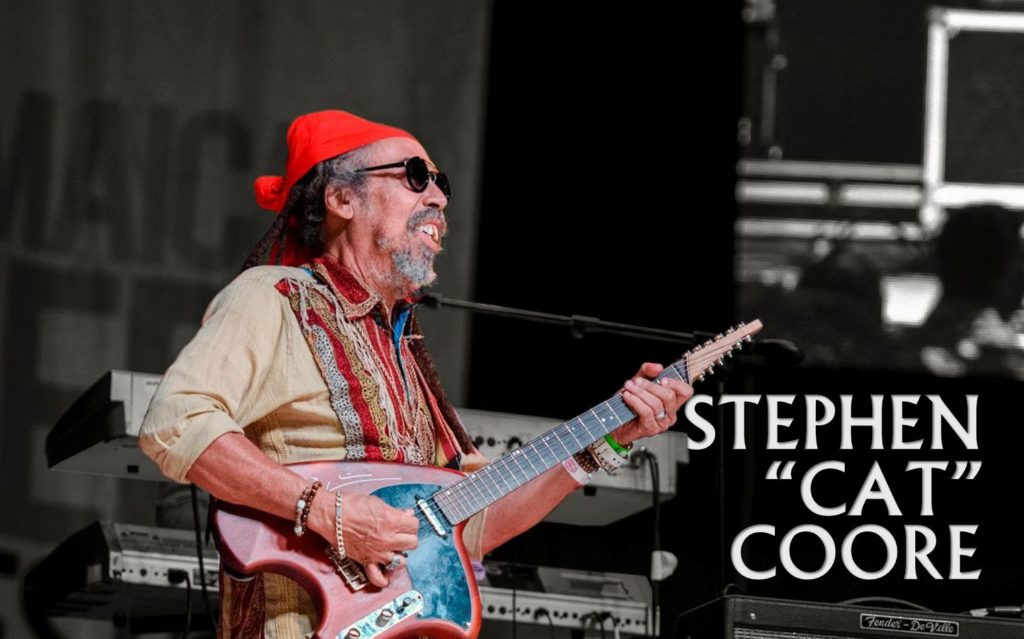 Stephen “Cat” Coore is a legendary reggae ambassador being a founding member of the 9X GRAMMY nominated group Third World. “Cat” is closing in on 50 years with Third World so I was very excited to hear about his travels while touring.

He shared his thoughts on what it means to him to visit so many different countries and all of the people he has met around the world. I particularly enjoyed hearing what countries he has yet to visit and I hope he gets a chance to tour those countries.

Make sure to follow Cat and Third World on their social media pages to see where they will be playing next and to stay up to date with their new music.

Connect with Stephen “Cat” Coore on his social media pages:

ABOUT Stephen and Third World

After recording some tracks with Geoffrey Chung which were not released, the band’s first single was the self-produced “Railroad Track” (1974). In their early days they played primarily in Kingston’s hotels and nightclubs and (along with The Wailers) supported The Jackson Five when they played at the Jamaican National Stadium.

They were soon signed by Island Records and toured Europe with The Wailers. The band’s self-titled debut album was released in 1976. The album included a cover of “Satta Massagana”, originally performed by The Abyssinians, which became a local hit. Hamilton and Cornell Marshall (who had replaced Barovier earlier) were replaced by two more former Inner Circle members, singer William “Bunny Rugs” Clarke and drummer Willie Stewart, before the recording of their second album, 96° in the Shade (1977), which included several local hits. Notable among its eight tracks were “1865 (96° in the Shade)”, a reference to the 1865 Morant Bay rebellion, “Rhythm of Life” and the album’s only cover, “Dreamland”, written by Bunny Wailer. They played in front of 80,000 people at the Smile Jamaica festival in 1976.

In 1977 the band collaborated with psychiatrist Frederick Hickling on the Explanitations show that was performed at Kingston’s Little Theatre early the following year.

Third World’s greatest success came in the late 1970s and early 1980s, peaking with their cover version of The O’Jays’ “Now That We Found Love” from their third album Journey to Addis. After its initial recording, the single was remixed at the behest of Island Records Special Projects division head, Alex Masucci, with new vocals and an uptempo beat. “Now That We Found Love” became a hit single on both sides of the Atlantic in 1978, reaching the top 10 in the UK.  Journey to Addis became a top thirty hit album in the UK. They had first met Stevie Wonder in Jamaica in 1976, and the single prompted him to perform with them at the Reggae Sunsplash festival in 1981 in the wake of Bob Marley’s death, playing his tribute to Marley, “Master Blaster”. Third World went on to perform several times at the festival, and they also took part in the “Reggae Sunsplash USA” tour in 1985. Wonder also wrote, along with Melody A McCully, their 1982 hit “Try Jah Love”, which brought them further exposure in North America. They were also guests during the third season of SCTV.

Amid claims of artistic differences “Carrot” split from the band in the mid-1980s. The resulting five-piece band then went on to record more commercial tunes such as “Sense of Purpose”, “Reggae Ambassador”, “Forbidden Love” and “Committed”.

Their version of “Now That We’ve Found Love” was used as the basis of Heavy D’s 1991 hit rap version.  In 1992 they returned to work with Stephen Stewart and Geoffrey Chung on the album Committed.

In 1983, Third World had cross-over success on the UK Jazz Funk scene with their reggae single ‘Lagos Jump’ largely thanks to Robbie Vincent and Jeff Young who played the 12″ version on their Radio London shows. The track also became popular on the London club scene and in particular at Flicks in Dartford.

Telstar Records released a double-album compilation in 1983 which collected up all the mainstream club extended versions and remixes by artists and groups that had enjoyed relatively good UK chart success between 1981 and 1983. Entitled ‘In The Groove’, the compilation’s lead track on Part Two was Third World’s extended version of ‘Dancing on the Floor (Hooked on Love)’. The track had originally been released in 1981 in 7″ edited and 12″ extended versions, and included on Third World’s impressive ‘Rock The World’ album. With the release of the Telstar compilation, this brought about an upsurge of interest in Third World’s dancefloor output and certainly paved the way for the next two years recordings with Columbia Records (CBS).

In 1985, the group’s focus steered by a shifting music scene, brought about a stylistic change in musical direction with the release of “Sense of Purpose”. The single was released as a 7″ edit and 12″ extended version and later was reissued as a Shep Pettibone club remix. Whilst the single was popular, it only made the lower ends of the UK charts. The 12″ extended version was released with an instrumental plus the full length version of their 1983 cross-over hit ‘Lagos Jump’ which almost certainly boosted the sales of ‘Sense of Purpose’.

Also in 1985, “Now That We’ve Found Love” was back in the UK charts again as Paul Hardcastle decided to release a club remix but as with the case of his D-Train remix putting the Hardcastle signature sound of electronic keyboards on the track and reverbing the opening vocal. Whilst the remix was a UK hit, the remix had seemingly lost its reggae roots and the Hardcastle remix has since largely been forgotten in the decades that have followed. The result being that most DJs and radio stations have returned to the original reggae version.

Despite several more line-up changes, including the departures of Cooper and Stewart, and a decline in mainstream success, the band is still recording and performing up to the present day, including in front of a television audience at the Cricket World Cup 2007 Opening Ceremony in Trelawny.

In 2008 the band received a lifetime achievement award from Charles Drew University.

In January 2013, the group was awarded a Lifetime Achievement Award at the Jamaica Jazz and Blues Festival in Montego Bay as they celebrated their 40th year in music.

In 2013 the group completed a 40th anniversary world tour; Illness forced Clarke to miss the European shows, with AJ Brown standing in as lead vocalist.

The album Under the Magic Sun is due to be released in June 2014 on Cleopatra Records, featuring vocals from Bunny Rugs, Brown, Coore, and Maurice Gregory.

The group’s 2019 album More Work to be Done received a nomination for a Grammy Award in the Best Reggae Album category, the seventh time they have been nominated