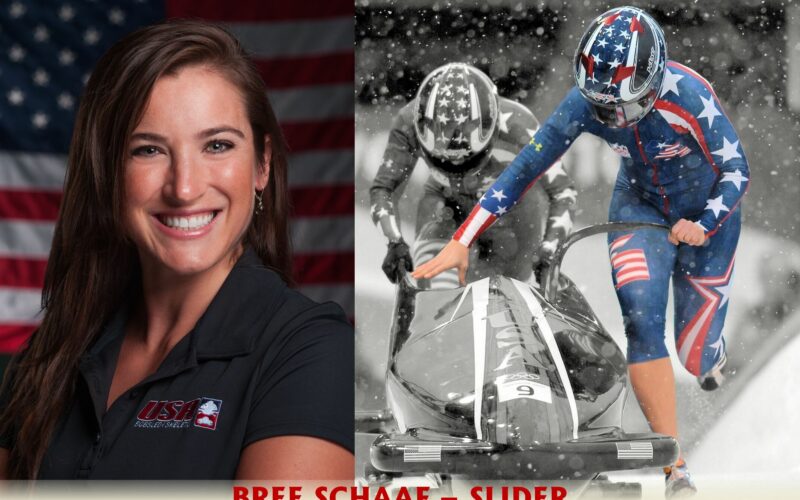 Bree Schaaf is my guest on today’s podcast. Bree is a winter Olympian in bobsled, coach of sliding sports, Olympic commentator and a member of the athletes’ advisory council. I always enjoy speaking with world class athletes about their travel experiences and Bree was no exception. She discussed diet and fitness tips while being an athlete and even as a coach and commentator. She is a wealth of knowledge and I was happy she was willing to share it with my listeners.

Bree’s listening choice while traveling for work is:

Bree enjoys listening to music when she travels.

Bree is an American skeleton racer who competed from 2002 to 2007, then switched over to bobsled as a pilot from 2007-2014. Her best Skeleton World Cup finish was sixth at Calgary in November 2006.

In high school, she competed in track, volleyball, and basketball before playing volleyball exclusively.  She earned a scholarship for volleyball and played collegiality at Portland State University in Oregon.  Schaaf graduated with high honors and a BA in Anthropology.

Schaaf’s best finish in skeleton at the FIBT World Championships was 11th in the women’s event at St. Moritz in 2007.

Bree switched to bobsled for 2007-8, starting on lower racing circuits before qualifying to race World Cup in 2009 after winning the 2009 US National Championship in bobsled. Bree also finished 4th at the Bobsled World Cup in Park City, Utah in November 2009. She also took 6th at the 2009 World Cup Whistler track debut, and 5th at the February 2009 World Cup race in Park City, with 9 top-ten world cup finishes in total.

It was announced on January 16, 2010 that she made the US bobsled team for the 2010 Winter Olympics. She finished fifth in the two-woman event.

In 2009 Schaaf started work as a sliding commentator for Universal Sports Network. She joined NBC’s team at Sliding Center Sanki for the 2014 Winter Olympics.