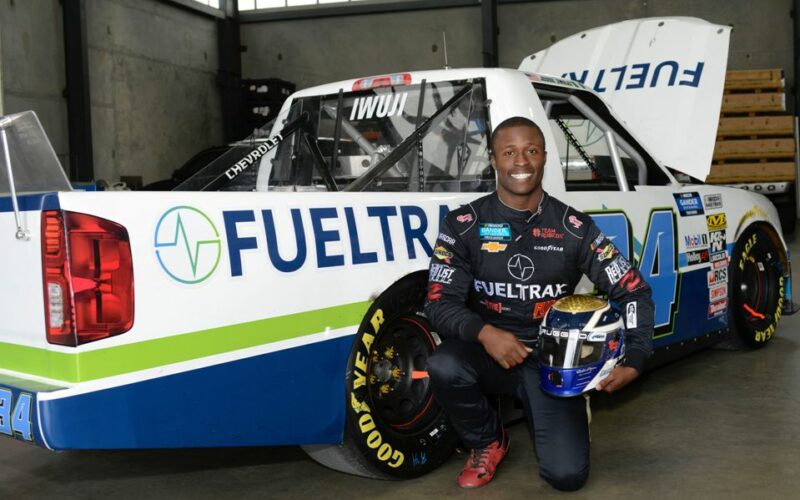 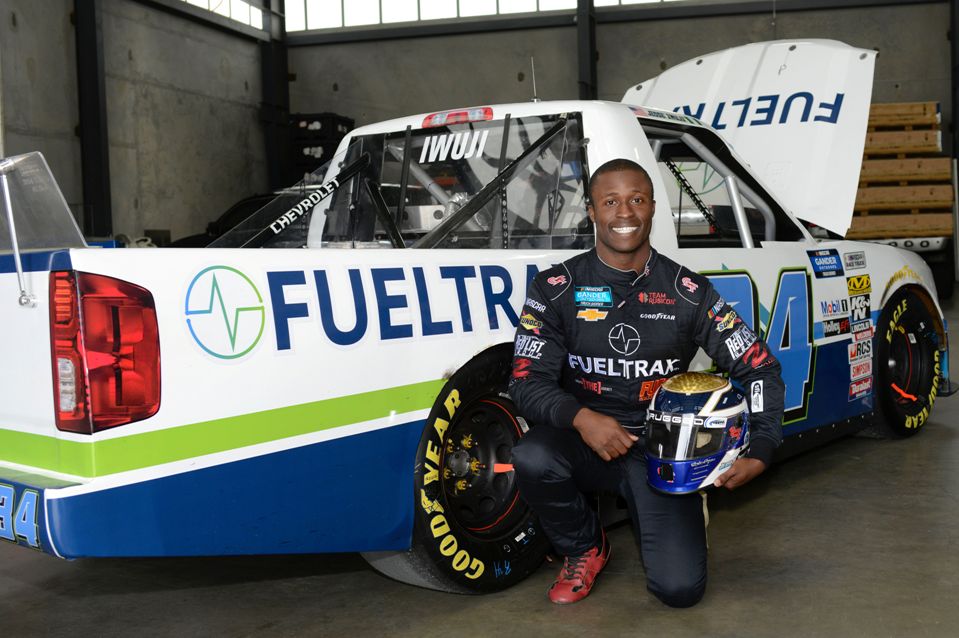 My guest on today’s podcast is Jesse Iwuji. Jesse is an American professional stock car racing driver and officer in the United States Navy Reserve. He currently competes in the NASCAR Gander Outdoors Truck Series in the No. 34 for Reaume Brothers Racing.

“toughest part with the traveling…. sometimes might be just getting enough rest”

Iwuji attended the United States Naval Academy, where he joined the school’s college football and track and field teams; on the former, he was a free safety for the Navy Midshipmen. He graduated from the academy in 2010 and entered the United States Navy as a surface warfare officer, in which he served on the Mine Countermeasures ship Exultant and USS Comstock. After seven years on active duty, Iwuji transitioned to the Navy Reserve.

As a sailor and driver, Iwuji has served as an ambassador for both the military and NASCAR communities. In addition to supporting military philanthropic groups, he is also involved in various NASCAR events supporting the armed forces and veterans.

While attending the Naval Academy, Iwuji first expressed interest in motorsports when the Midshipmen visited the Lowe’s Motor Speedway in Charlotte, North Carolina before the 2006 Meineke Car Care Bowl, during which the players rode around the track. During his senior year, he started drag racing at Capitol Speedway in Crofton, Maryland, driving a Chrysler 300.

After his graduation, he raced a Dodge Challenger. Four years later, he participated in the Mojave Mile speed trial; for the event, he upgraded his Challenger’s engine to a horsepower of 1,100. With the new engine, Iwuji ran at a speed of 200.9 miles per hour (323.3 km/h), becoming the fifth modern Mopar driver to accomplish the feat at the Mojave Mile. Afterwards, he joined the Naval Postgraduate School staff in southern California, where he was involved in road racing – driving a Chevrolet Corvette – before making the transition to stock cars.

In 2014, Iwuji tested a stock car for Performance P-1 Motorsports at Irwindale Speedway. A year later, he began racing for the team after returning from deployment in the Persian Gulf. He first competed in the Whelen All-American Series, finishing 15th in his debut. He also made two K&N Pro Series West starts that year at Evergreen Speedway, but did not start the race. He later ran the race at Meridian Speedway, finishing 23rd after a crash. In the winter, he ran 34 dirt track races, one of which included a fifth-place finish in a Winged 500cc Outlaw Kart A-main.

Iwuji started competing full-time in the K&N Pro Series West in 2016, driving the No. 36 for Patriot Motorsports Group. That year, he was named to the “Mighty 25: Veterans poised for impact in 2016” list by military website We Are The Mighty. He recorded a best finish of tenth at Orange Show Speedway. At the Utah Motorsports Campus race, he earned the Move of the Race Award, which is given to the driver who gains the most positions in a race. During the year, he also competed in the NAPA Big 5 Late Model Series at Meridian Speedway. Iwuji battled with Todd Gilliland and Salvatore Iovino for the K&N Pro Series West’s 2016 Most Popular Driver Award, but lost to Iovino. He finished the season tenth in the final point standings and sixth the rookie standings.

In February 2017, Iwuji was awarded the NASCAR Diverse Driver Award, which is given to a minority/female driver who “exemplifies outstanding performance both on and off the race track in encouraging awareness and interaction with NASCAR and motorsports”.

Prior to the 2017 season, Iwuji became Patriot Motorsports Group’s primary owner, while former National Football League linebacker Shawne Merriman partnered with the team to serve as owner of the No. 36 car. The two met during a fashion show in Los Angeles promoting Merriman’s new clothing line; Merriman, a longtime motorsports fan, agreed to join PMG. Over the course of the season, Iwuji continued to race Outlaw Karts to develop his racing ability on both dirt and asphalt. In February, he ran his first K&N Pro Series East race in the season opener at New Smyrna Speedway, in which he finished 21st.

In February 2018, Iwuji tested an ARCA Racing Series car for PMG at Daytona International Speedway in preparation for his series debut in the Lucas Oil 200. For the 2018 season, he intends to focus on competing in ARCA, particularly the larger tracks, in addition to running sporadic K&N East and West races. In August, Reaume Brothers Racing announced Iwuji would make his NASCAR Camping World Truck Series debut at Canadian Tire Motorsports Park in the team’s No. 34 Chevrolet Silverado. After starting 31st, he finished 25th.

Iwuji returned to Reaume Brothers Racing and the Truck Series in 2019, driving the No. 34 at Las Vegas Motor Speedway. 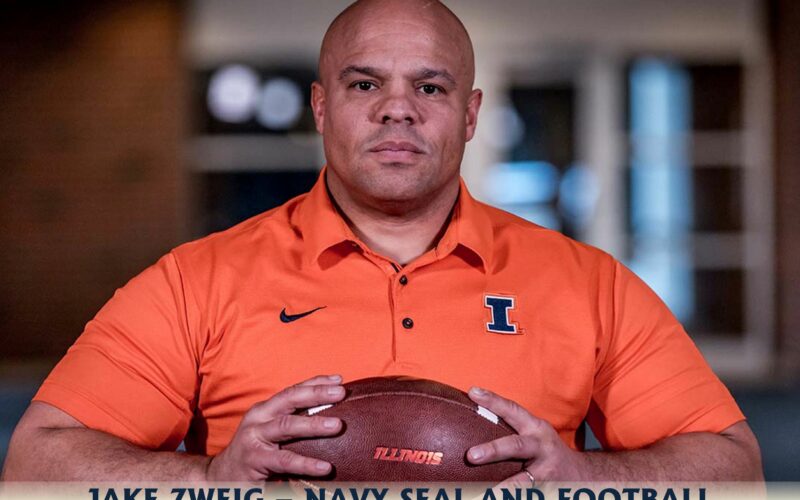 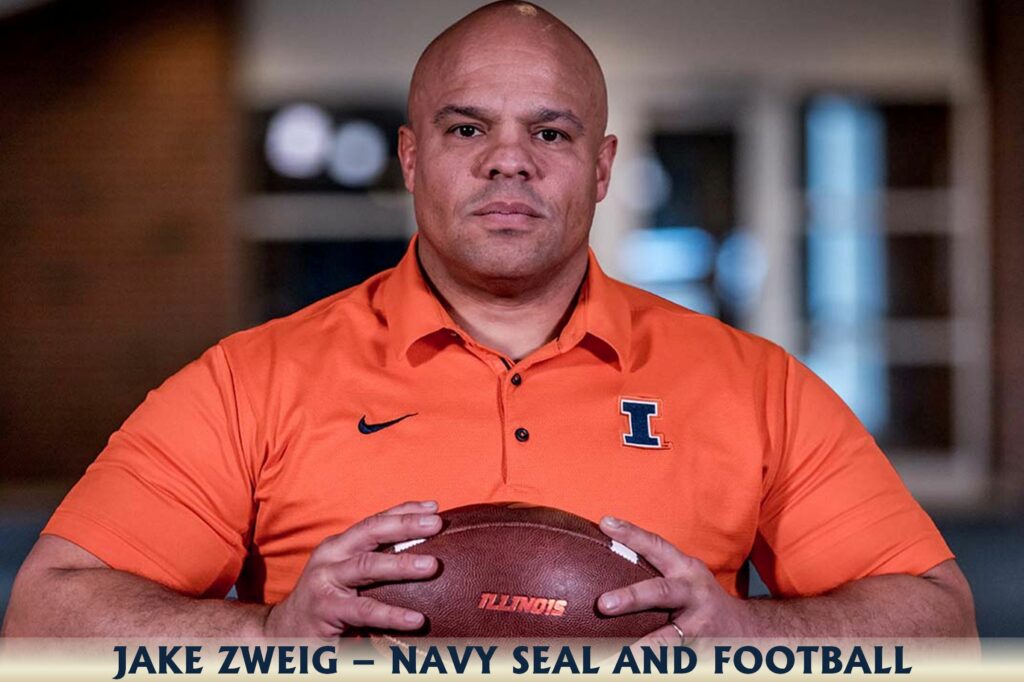 Jake Zweig is my guest on today’s podcast. Jake is an ex-Navy SEAL and D1 Football Coach. This episode is a two part episode. Part 1 gives us background of Jake and his mindset. Part 2 we talk about his time traveling internationally while he was a Navy SEAL. He speaks about his time working on the television shows and I also ask Jake how he prepares his student/athletes to schedule their time while playing football at the University of Illinois. His response is one for every coach on most levels.

Jake is man who has accomplished a tremendous amount in a short time and is just now hitting his prime. Jake attended the U.S. Naval Academy where he played football and wrestled. He graduated as a commissioned officer receiving his degree in computer science.

He served for two years before reporting for Navy SEAL training where he was named the SEAL class leader. Following his SEAL training, Jake reported to SEAL Team 8 in Little Creek, VA and attained the rank of Lieutenant.

He then went on to earn his MBA from the University of Michigan.

Jake began his coaching career in 2005 when he joined the University of Maryland staff as a graduate assistant working with the Terrapin wide receivers. He has since worked as an assistant coach at several colleges and is now working at the University of Illinois as their Special Teams Analyst.

His off the clock activities keep him equally busy. He co-hosted the Discovery Channel series called “Dude You’re Screwed” and competed on History Channels show “Top Shot” against law enforcement officers, military snipers and professional shooters. He still goes scuba diving and parachutes to raise awareness for veteran’s charities and just for fun.