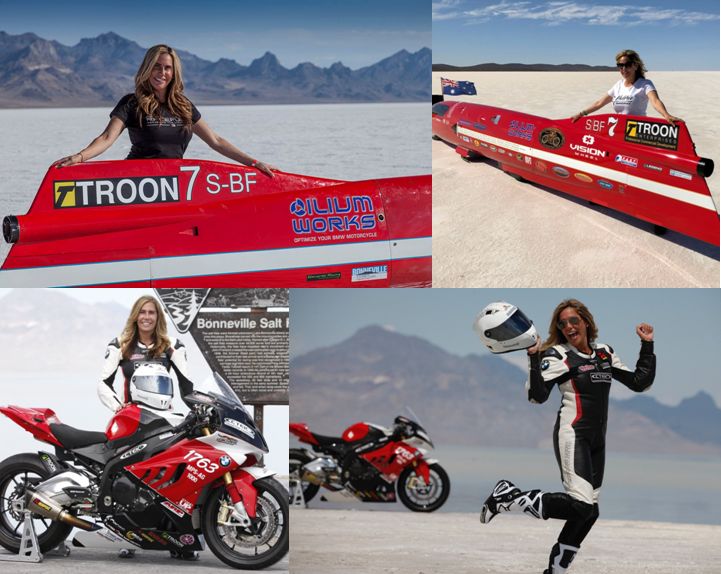 My podcast guest today is Valerie Thompson, America’s Queen of Speed. Valerie is the first female rider over 300 mph, earning the title of “World’s Fastest Female Motorcycle Racer.” She posted a new top speed record of 328 mph in 2018 at the DLRA Speed Week competition in Southern Australia. Valerie talks about the difference between traveling in the States versus internationally with a team, trailers, equipment and dogs all while trying to stay focused on riding a motorcycle 300+MPH, hopefully 400+MPH next time.

“We take our Bonneville very serious…..for us it takes a whole year for all of the preparation, our team is working on the motorcycle two times a week. We’ve got a team of 18 people but not all 18 are working on the bike because everybody has a certain project that they do on the bike.”

Valerie is an 8-time land speed record holder with membership in seven different 200 MPH Clubs, one 300 MPH Club and lifetime membership in the famed Bonneville 200 MPH Club. Thompson was inducted into the Sturgis Motorcycle Hall of Fame in 2018. Valerie’s quest to become the world’s fastest motorcycle racer is the subject of P-51 Pictures’ and MN8 Films’ upcoming feature documentary, Rockets and Titans. Her many racing accomplishments have earned Valerie the moniker of “America’s Queen of Speed.”

If you have ever wondered what it would be like to ride a motorcycle 300+mph or want to hear about the aftermath of crashing at 300+mph you need to give this episode a listen. Valerie shares some great insights on what it takes to prepare for a long term goal that takes years to prepare for and only last minutes.