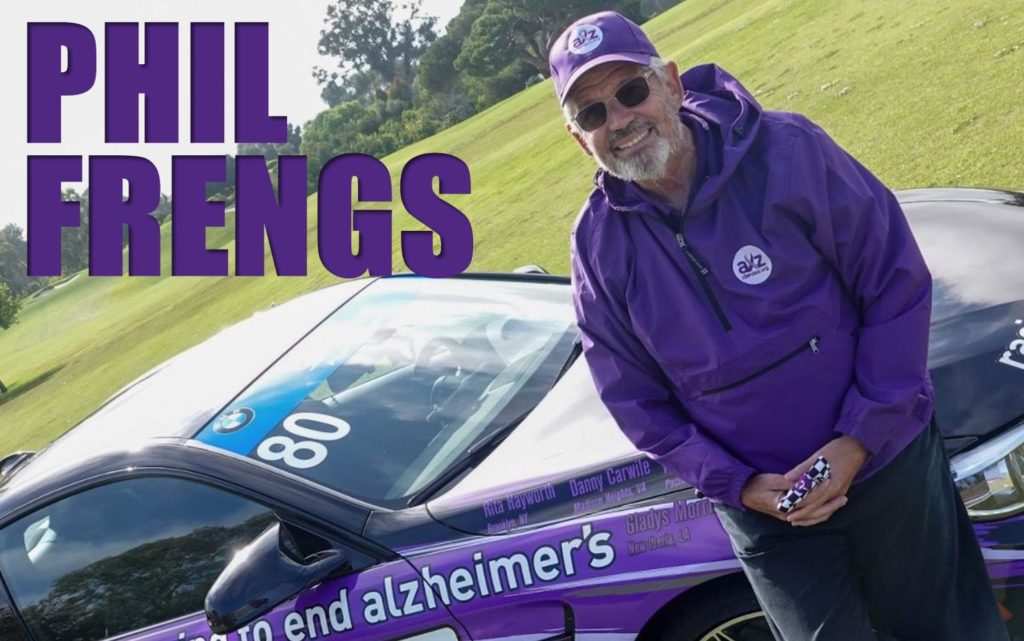 Phil Frengs is the Founder and driving force behind Racing 2 End Alzheimer’s.  He is also the CEO for Legistics and he traveled extensively for the corporate grind.  Being a father and husband, Phil was asked the very difficult question “What do you do when someone you love is diagnosed with Alzheimer’s?”

Phil’s answer to that question was deciding to make a difference in the fight against this insidious disease that affects 6 million Americans and 50 million people worldwide.

“When my wife Mimi was diagnosed with early-onset Alzheimer’s, I was devastated — and felt so alone. I started Racing to End Alzheimer’s as a way to channel my emotions into something that might help others who were having similar experiences.”

Phil is a racing buff. His company, Legistics, has sponsored race cars for a decade. So, he wondered:

“What if we replaced the big sponsor logos on our car with the names of people who are facing dementia or who have suffered from this disease? Wouldn’t families and friends contribute $250 to honor someone they love in such a unique and visible way?

For hundreds of donors since we started in 2017, the answer has been a resounding “Yes.”

We had a great talk about the reasons he started the organization and what he has learned so far as he travels across the country raising money and awareness to defeat Alzheimer’s.

Connect with Phil Frengs and Racing to End Alzheimer’s on social media:

In the race to lessen the impact of Alzheimer’s, we are focused on funding the care AND funding the cure, which is why we contribute to both UCLA and the Nantz National Alzheimer Center at Houston Methodist respectively.

Houston Methodist was one of the clinical trial sites for aducanumab, the drug recently approved by the FDA. Some think the medication could be a game changer. But others say there hasn’t been enough evidence to support its use. Finding effective treatments and even a cure is, of course, the goal. But Alzheimer’s has proven stubbornly resistant, as evidenced by the fact that the mainstays of therapy only treat symptoms, not the underlying causes.

“Donepezil (sold under the brand name Aricept), improves memory a little bit in some people but, in many, does not,” explains Joseph Masdeu, MD, PhD, director of the Nantz National Alzheimer’s Center at Houston Methodist and a member of the medical advisory board of Biogen, which makes aducanumab. “Another drug, called memantine (Namenda), shows a behavioral benefit in some people but not others.”

“Aducanumab is a different drug entirely. It’s an antibody that binds to amyloid proteins in the brain, leading to reduced levels of protein plaques. The hope is this will alter the underlying course of the disease,” Dr. Masdeu says.

Know that when you add your loved one’s name to the car, you can specify where your contribution goes. And, of course, your donation is matched 100% by our sponsor partners.

We will be making another check presentation to Dr. Masdeu next week in Houston. Please follow along and join us in Racing to End Alzheimer’s.