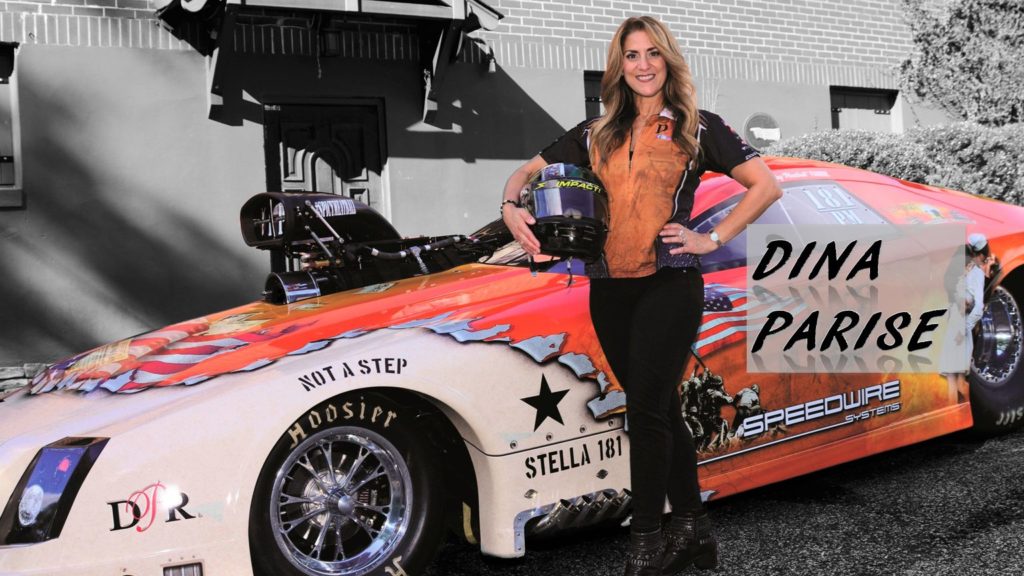 Dina Parise is my guest on today’s podcast. Dina is the President of Dina Parise Racing, as well as a driver, cook, PR person, social media and marketing maestro. Parise is the 2015 IHRA Pro Mod World Champion and is the first female to hold that esteemed title, yet that only scratches the surface. How many former Professional Figure Skating, World Champion Pro Mod Drivers do you know? That’s right! Only one! That is what makes Parise one of the most dynamic figures on the circuit today.

“I will normally get my workouts in at the track in the mornings, I’ll get up a little earlier as I always do a track walk”

Growing up on Long Island, she was a competitive gymnast all through school but her real passion was figure skating. Her ultimate dream was to skate professionally for the World-Renowned ‘Ice Capades’. She took that passion and made her dream a reality, although it almost did not come to fruition! She passed her audition with flying colors, but there was an issue. Parise was told she did not meet the height requirement. In the scheme of things, that did not seem to matter to the gentleman running the audition. He was so impressed with her, he had her ‘adapt’ her height (yes, she lied) on the application, and the rest is history. She then skated, touring with the ‘Ice Capades’ for four years.

Did you ever see something and just know you had to try it? Even if maybe you did not succeed, but you just had to try? Well, that’s just what Parise thought when she began Drag Racing. She had to try it. When your very first time down the ¼ mile is 9 seconds at 146 MPH you know you mean business! Not to mention, she was in her 30’s at the time. There was no looking back from there!

Now in her Pro Mod Cadillac ‘Stella’, she powers down the ¼ mile track in under 6 seconds at over 240 MPH. In her words, “I was born with glitter in my veins and a led foot!” Racing is not just a man’s game as some may think. The most engaging part about it is the fact that in racing, men and women compete equally and are not segregated by gender (unless you are affiliated with F1, but that’s another story).

Something many people do not realize is that Drag Racing circuits and touring Ice shows are quite parallel. Touring with an Ice show consists of traveling week to week from venue to venue. The ice surface changes, but the performer still has their ‘skates’ (to perform with) and ‘sequin costume’s. The fans wait (by the backstage door) for autographs and the children have positive role models to look up to. In Racing, the game is the same although the venue and the equipment may be vastly different. The racers race at a different track (venue) each week. The track surface changes, and racers have ‘Tires’ (for performance) and ‘Fire suit’ (as clothing). When coming back from a run, fans wait to have autographs signed, and meet the drivers. You see, it’s all relative!

DPR has a rich history in giving back to the community on many levels. DPR has always gone by the motto, ‘it’s an accomplishment to get to the finish line first, but the journey getting there is what is most important.’ DPR is very proud to take fan engagement to the next level in the way of programs Parise herself has developed to honor our nations Veterans and Military Members. Creating visibility honoring those who have served this great nation is paramount to DPR.

Having an eclectic background has led Parise into the realm of motivational speaking (not as cliché as it sounds) combined with elite athlete mentorship as well as keynote speaking for various companies and events. Parise has also ventured into the hosting side. Her days as a performer for the Ice Capades honed her skills for promotion, marketing and on-camera work.

“I want people, (especially females) to know they can achieve anything they set their mind to.” Said Parise. “Never let anyone tell you no.”

“Follow your dreams. If you feel the need to try it, then try it! Life is not a dress rehearsal,” Stated Parise “As I always say… In life you get one ticket, and I’m using mine until it expires!”