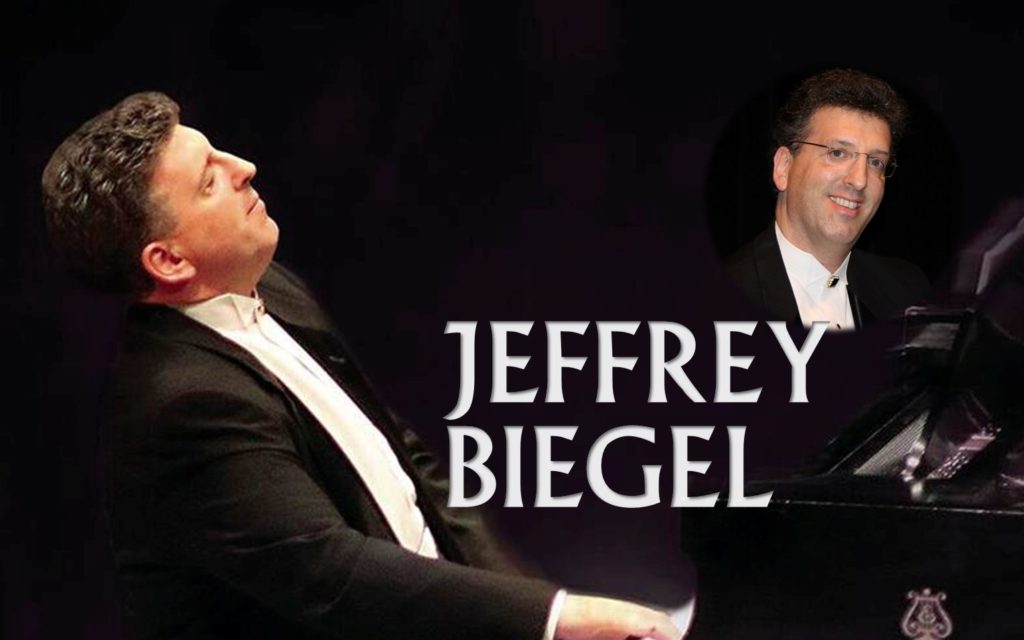 Jeffrey Biegel is a pianist with many other hats in the music business. Jeffrey shares his decade’s worth of knowledge of being a pianist, being sponsored by Steinway Pianos, what the process is for creating music and how far out his future projects are planned for. Being a “in demand” performer has afforded Jeffrey many trips abroad performing in various orchestras and at several celebrated events.

He also shares the advice he gives young performers which is invaluable for so many who would also like a career in the music industry. Even with his start at Julliard in New York City at a young age, Jeffrey still attributes his success to many factors. Take a listen to a great episode with a business traveler who plays our favorite music as well as his own new compositions.

Follow Jeffrey on his social media pages to see what he is up to and where he will be performing next …..

Connect with Jeffrey Biegel on his social media pages:

The life of Jeffrey Biegel takes its roots from age three, when Mr. Biegel could neither hear nor speak, until corrected by surgery. The ‘reverse Beethoven’ phenomenon explains his life’s commitment to music, having heard only vibrations in his formative years. The year of 2020 focused on composition and commissioning projects: original “Waltzes of Hope”, “Sonatina”, and “Three Reflections: JFK, RBG and MLK” for solo piano, and for piano and orchestra, orchestrations by Harrison Sheckler. September 2021 sees the world premieres of his “Reflection of Justice: An Ode to Ruth Bader Ginsburg” with the Dallas Symphony Orchestra, and Ellen Taaffe Zwilich’s “Remembering Ruth Bader Ginsburg” for mezzo-soprano, piano and orchestra in tribute to the late Supreme Court Justice Ruth Bader Ginsburg, with mezzo-soprano Denyce Graves. Also, the world premiere of Ellen Taaffe Zwilich’s “Shadows” newly arranged for piano and seven players with the Idaho State Civic Symphony.

Considered the most prolific artist of his generation, Moravian College in Bethlehem, PA, conferred the Honorary Degree of Doctor of Humane Letters upon Mr. Biegel, for his achievements in performance, recordings, chamber music, champion of new music, composer, arranger and educator.

In 2019, Kenneth Fuchs’s “Piano Concerto: ‘Spiritualist'” with the London Symphony Orchestra led by JoAnn Falletta received a Grammy Award for Best Classical Compendium, featuring Mr. Biegel as its soloist. In 2019, the first digital recordings were released on Mr. Biegel’s Naturally Sharp label: “Cyberecital: An Historic Recording”,”A Pianist’s Journey”, and the September 2021 release of George Gershwin’s “Rhapsody in Blue” 1924 version with the Adrian Symphony Orchestra, Bruce Kiesling conducting. In 2022, he will premiere Jim Stephenson’s piano concerto, Daniel Perttu’s, ‘A Planets Odyssey’ for piano and orchestra, Farhad Poupel’s “The Legend of Bijan and Manije” for piano, orchestra and chorus, and Peter Boyer’s “Rhapsody in Red, White & Blue” in 2023.

Chosen the first pianist to record for the Steinway & Sons recording label, Mr. Biegel’s ‘Bach On a Steinway’ debuted #3 on the Classical Billboard charts, followed by ‘A Steinway Christmas Album’ reaching the #1 spot on the Billboard chart. This was followed with a tribute to the Golden Age pianists for Steinway’s release, ‘A Grand Romance’, featuring knuckle-busters performed by the great pianists of the early 20th century. In 1997, he created and performed the first live audio/video recitals on the internet from Steinway Hall in New York, and the recording is preserved on a recording bearing the website name at that time, ‘cyberecital.com’. The videos from these historic recitals are available on Mr. Biegel’s website and YouTube.

Pioneer of commissioning projects joining multitudes of orchestras as a model for commissioning new music in the 21st century, Mr. Biegel created the first largest consortium of orchestras in 1998 toward bringing a new work to audiences in 2000. He brought 27 orchestras into the largest commissioning project up until that time, for Ellen Taaffe Zwilich’s ‘Millennium Fantasy’ premiered with the Cincinnati Symphony Orchestra in 2000. In 2000, he decided to go one step further and create the first 50 state project with Tony award winning composer, Charles Strouse’s ‘Concerto America’. Every orchestra in the USA received the press release announcing the ‘Concerto America Project’. The tragic events of September 11, 2001, made Mr. Biegel realize that the timing for such an endeavor was inappropriate. The Boston Pops, conducted by Keith Lockhart, delivered a brilliant World Premiere in June 2002, followed by a performance with the former Honolulu Symphony Orchestra. Taking commissioning to a new level, Mr. Biegel created a new project joining 17 orchestras in the USA with 1 orchestra in Germany, representing the European Premiere for Lowell Liebermann’s ‘Concerto no. 3, Opus 95’. The Milwaukee Symphony Orchestra with Maestro Andreas Delfs gave the premiere in 2006, followed by the Landestheater Sinfonieorchester Schleswig-Holstein in Germany, conducted by Gerard Oskamp. In 2010, Mr. Biegel performed the World Premiere of William Bolcom’s ‘Prometheus’ for piano, orchestra and chorus, with Carl St. Clair leading the Pacific Symphony Orchestra and Pacific Chorale, followed with performances by the Detroit Symphony Orchestra led by Leonard Slatkin, the Calgary Philharmonic and Chorus representing the Canadian commissioning member orchestra, and several more involved in this project. In addition, Mr. Biegel gave the World Premiere of Richard Danielpour’s ‘Mirrors’ with the Pacific Symphony Orchestra, also with Maestro St. Clair conducting. In March 2016, Mr. Biegel performed the World Premiere of Kenneth Fuchs’s ‘Piano Concerto: Spiritualist’ based on three paintings by American abstract artist, Helen Frankenthaler, with the Springfield Symphony Orchestra (MA) and the Wheeling Symphony Orchestra.

Further developing the repertoire, Mr. Biegel returned one decade later in 2010 to Pulitzer Prize composer, Ellen Taaffe Zwilich, for a new commissioning project. ‘Shadows’ features piano, orchestra and percussionist on drum set, djembe and crotales. The piece reflects many who emigrate from their homeland to new lands, bringing their native cultures, music, language and styles with them, hence creating ‘shadows’ of their heritage in their new homeland. The Louisiana Philharmonic Orchestra presented the World Premiere in 2011, with Maestro Carlos Miguel Prieto conducting. Kevin Rhodes conducted the Pro Arte Chamber Orchestra with Mr. Biegel’s son, Evan, then only 16, in his debut as percussion soloist in 2013. In Minneapolis’ Orchestra Hall, Mr. Biegel met then young composer, Jake Runestad, who created a composition for piano, orchestra and chorus, teaming with war veteran and renowned poet, Brian Turner. ‘Dreams of the Fallen’ received its World Premiere with the Louisiana Philharmonic Orchestra and Symphony Chorus of New Orleans at the National WWII Museum on Veterans Day 2013. Also in 2013, composer/conductor Lucas Richman composed his ‘Piano Concerto: In Truth’ exclusively for Mr. Biegel, which received its premiere in 2013 with the Knoxville Symphony Orchestra, with the composer conducting. Renowned composer, Daniel Dorff, composed his Piano Concerto for Mr. Biegel, premiered with the Etowah Youth Orchestra, conducted by Michael Gagliardo.

An avid composer, Mr. Biegel and his son, Craig, co-composed ‘The World In Our Hands’, published by the Hal Leonard Corporation. The Hal Leonard Corporation has also published ‘Christmas In A Minute’, an SATB choral version of Chopin’s ‘Minute Waltz’ as well as his arrangement of ‘The Twelve Days of Christmas’ for SATB divisi a cappella choir, and, ‘Hanukah Fantasy’ for SATB/piano (orchestration by Lucas Richman available through The LeDor Group). The orchestration for ‘Christmas In A Minute’ by Kermit Poling is available through Lauren Keiser Music, which can be performed by soloist and orchestra, or with choir and orchestra. Mr. Biegel received a commission to compose a new work for SSA choir with the chosen text, ‘Hey Ho, The Wind and the Rain’ from William Shakespeare’s ‘Twelfth Night’, and is published by the Hal Leonard Corporation. Other choral compositions include ‘There Shines a Light Ahead’ for SATB/piano published by Porfiri & Horvath in 2013, an arrangement of ‘The Christmas Song’ for SATB a cappella choir, and both ‘Ho Ho Hanukah, Ho Ho Christmas’ and ‘A Different Kind of Hero’ are published by Carl Fischer Inc. ‘Four Psalms for Choir’ are published by the LeDor Group, and, The ‘Elegy of Anne Boleyn’ and ‘Auld Lang Syne’ for piano solo and for SATB choir and piano are self-published.

Leonard Bernstein said of pianist Jeffrey Biegel: “He played fantastic Liszt. He is a splendid musician and a brilliant performer.” These comments launched Mr. Biegel’s 1986 New York recital debut, as the recipient of the coveted Juilliard William Petschek Piano Debut Award in Lincoln Center for the Performing Arts’ Alice Tully Hall. He studied at The Juilliard School with Adele Marcus, herself a pupil of Josef Lhevinne and Artur Schnabel. Mr. Biegel is currently on the piano faculty at the Brooklyn Conservatory of Music at Brooklyn College, a City University of New York (CUNY).